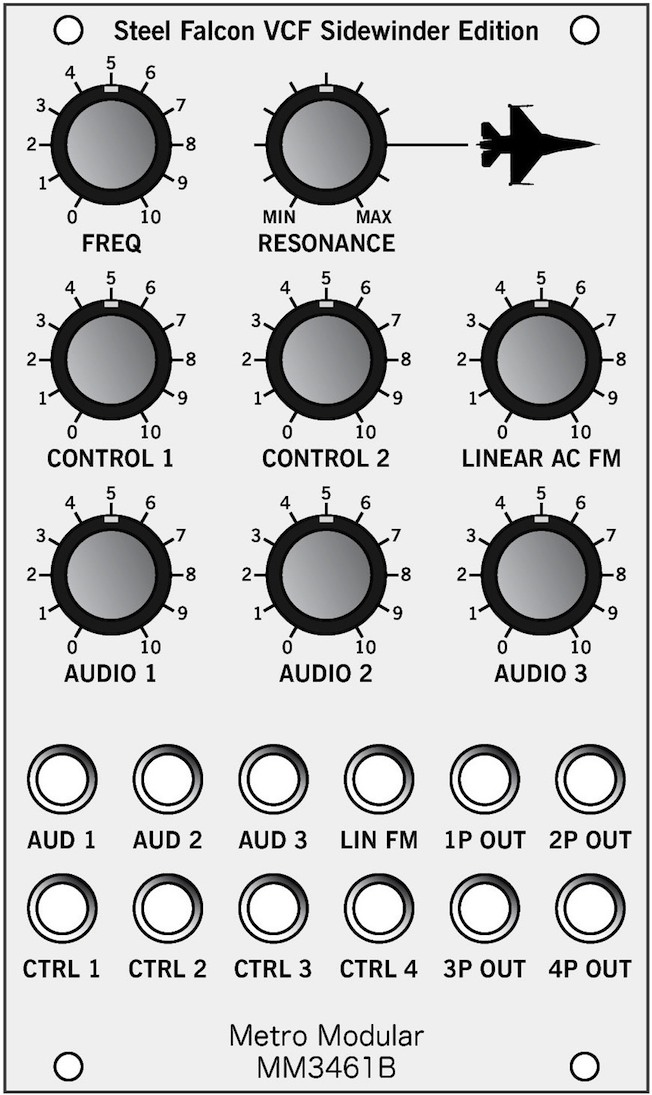 A Roland System 100m and a Formanta Polivoks both walk into a bar....

Vladimir Kuzmin's 1982-designed Polivoks filter  has become one of the great success stories of the last decade (thanks to the sterling efforts of Marc Bareille and The Harvestman), bringing the idea of a capacitorless programmable-power opamp filter to a scene fixated on discrete ladders, vactrols and OTAs as filter building blocks. However it's probably a comment on the conservatism of modern boutique synth design that no-one seems to have questioned how to take that circuit principle into different designs. Instead there seems to be more and more cloners fixated on the authenticity of vintage Soviet silicon.

Ladies and Gentlemen, meet the LM346. This is a much improved quad version of the LM4250 chip that is used in many Polivoks VCF clones (and the UA776 chip which was itself copied by the Soviets!) which has been hiding in plain sight for almost 40 years now. Until now no-one has adapted it to synth use, despite a datasheet promoting its use in filters.

As the Polivoks was an adaptation of the classic OTA-based 2-pole State Variable Filter we thought we would go in the opposite direction and try the 4-pole cascading lowpass OTA design pioneered by Roland and the Elektor Formant in the late 1970s. A schematic quickly sketched in Eagle late one night in a McCafé worked beautifully on breadboard, and the circuit quickly took shape. Difficulty arose because the same mechanism that tunes the filter in a programmable power opamp also progressively power-starves the rest of the chip resulting in some very unpleasant behaviour at the low end of the tuning range if left unaddressed. A bit of detective work and a bit of wisdom from the late Bob Pease helped us fix this and keep the bass nice and creamy!

The result is a rich-sounding lowpass filter which still has plenty of character and sizzle, and won't disappoint anyone looking for something new. Check out sample sounds on our SoundCloud page.

This iteration of the module brings every possible input and output option from the "backpack" filter core board to the front panel and provides attenuators for every nearly every input. It was intended as a "feature playground" testing configuration to choose an optimum panel configuration for a 10HP version (hence the B suffix), but reaction from beta users was so positive that we decided to launch with this configuration instead.

Frequency response is from about 9Hz (set by the LM346 silicon) to over 20kHz (set by the safe operating limits of the LM346). The filter is slightly noisy because of the way that a programmable op-amp filter works - incoming signals in each pole stage are attenuated by a set amount and then amplified back up by the same in order to bring the op-amp's tunable bandwidth down into the audio range. This has a side-effect of increasing signal path noise slightly, and affects the Polivoks design as well.

The voltage to pitch response of the filter is quite good, but progressively flattens out as tuning increases. This has consciously been left alone as we feel it is an aesthetic signature of the LM346 chip, and there are plenty of other options for those who crave perfectly tracking sinewave generators that can play "The Well-Tempered Clavier".

This circuit uses a AR1748-derived expo converter circuit, and like the MM314 has DC-coupled inputs, outputs, and resonant feedback loop for superior bass response.

In production; on sale