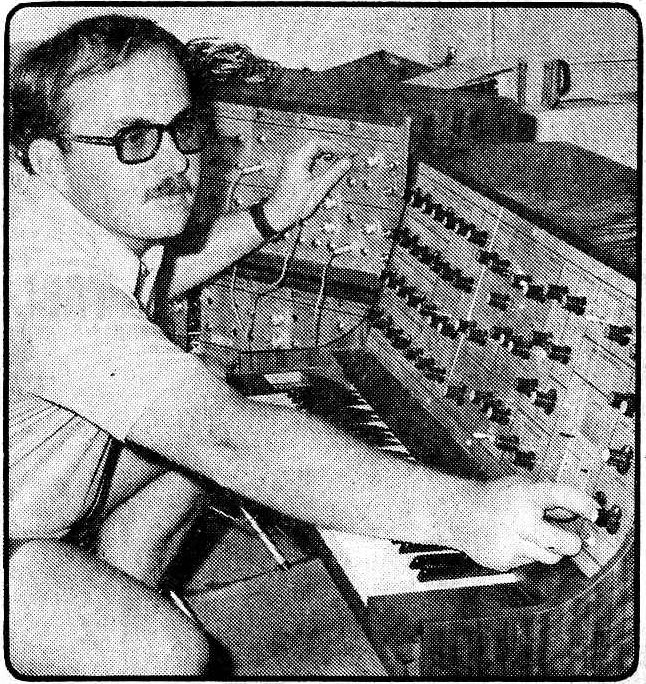 Once upon a time (the early 1970s to be exact), in the Australian city of Adelaide, a brilliant young engineering student named Trevor Marshall (pictured above in 1974) designed an innovative synthesizer. Although it used a pin patching matrix like the VCS3, it was a true original inside, with pioneering use of CMOS logic chips in the oscillators, filters and envelope/transient generators; and unique designs and functionality for almost every sub-module. Trevor was actually granted two Australian provisional patents for the synth design (for the oscillator and the filter).

Trevor refined his semi-modular prototype (on the left above) into a self-contained instrument (on the right), which was then published as the ETI 4600 DIY project by Australian magazine ETI in 1973 and 1974, and in a more compact form as the ETI 3600 in 1975. The kit was made available in the UK by Maplin as well, and slightly modified versions (the Maplin 3800S and 5600S) remained available into the 1980s.

Many thousands of these instruments were built, but often with varying build quality as they were predominantly built from kits. This makes good examples increasingly rare collector's items today, especially now that the instrument's unique sound is being rediscovered. Indeed, a Maplin 5600S recently sold for 5000 pounds on the VEMIA auction site.

It's long been a dream of mine to bring this amazing, pioneering instrument back to the marketplace in affordable modular form. Indeed, I've had an adapted original 3600 VCF board sitting alongside my Eurorack since 2010. Adapting a design which had a unique set of standards, such as true Hz/V control voltages throughout the system and 5(!) power rails was a challenge. In early 2017 I finally felt close enough to a solution to making it work in Eurorack to contact Trevor. To my delight, he has given me permission to adapt his designs and will be providing advice and guidance for the project.

The first module will be the 3600 lowpass VCF, with the 4600 multimode VCF to follow, and more to come!

The original Adelaide Advertiser interview with Trevor from 1974